After eight years as Chairman, Peter Baker has resigned from both the Chairmanship and the Committee. As I said at last month's AGM in my Vote of Thanks "That is a long stint, attending monthly committee and open meetings, making contacts, influencing the right people, and quietly making things happen. Only occasionally has, during Peter's Chairmanship, it been necessary to make a noise to get a proposal changed."

Peter's resignation was not a surprise to your Committee, he had given notice before last year's AGM, but he reluctantly agreed to complete one more year. We owe Peter a big debt of gratitude for his work over the years on behalf of the Civic Society.

Richard Probyn, who had guided us on Planning matters, also resigned and of course we have already reported the death in August of Pat Allan, for many years our Secretary and then acting secretary. Both Pat and Richard gave valuable advice, as well as time, to the Civic Society During the time they were committee members.

It became clear at the AGM, and from comments that have been expressed quietly, that the committee needs to give more emphasis to Planning matters. We have set about achieving this. Also, we have some work to do on the changes to the constitution. One proposed change was approved, the other change, after advising members, will be brought back to either an extraordinary GM or to next year's AGM.

Recently Morrisons, who have planning permission for a new large store on the site adjacent to the Marsh Harrier, have submitted a new design for a smaller store but with a secondary unit for a non-food retailer. Whilst it's good to know that Morrisons are again looking at St Ives there are reservations about the smaller store, this 'out of town' store may reduce shoppers in the Town, something we are keen to resist. We have made our comments known to the planners. There is also a proposal for a new fast food centre, this has not yet been submitted as an application but will be watched carefully, as it seems to me access to the site is unacceptable in terms of further congestion on St Ives' roads.

Finally two reminders: The Civic Society's web site http://www.stivescivic.org.uk/ has details of all our open meetings for this season.  Any late changes to talks will be announced here.

Secondly, at this Friday's open meeting we will hear John Deeks' talk on The History of Fenstanton. As normal the meeting will be held in the Free Church at 7.30pm. Please try to attend if you can. 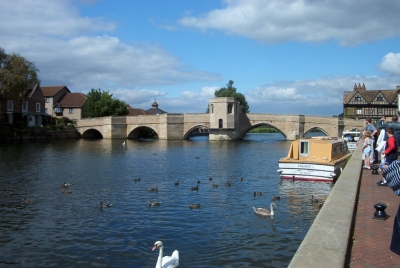